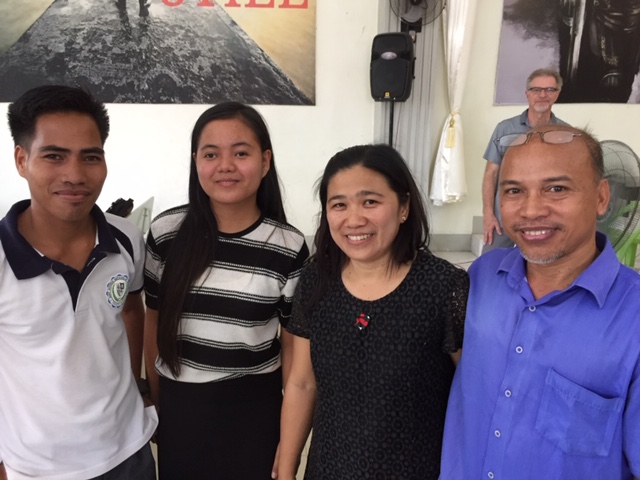 As we left Clark International Airport at 6:00 am on Monday, I was now leaving all that had been familiar and moving to the next leg of the journey which is all new to me. Leaving from Clark which is only an hour’s drive north from Baliwag, saved us from the stress of driving to the airport in Manila for which I was very thankful. After a brief flight of only one hour we landed in Cebu where we literally bumped into Paul, Leah and Dave. Unfortunately Sandy was not able to join Dave on this trip so she is missed. It was wonderful to see familiar faces and after warm greetings and getting a bite to eat we headed to our gate. Another brief flight and we landed in Tacloban. It has been very hot, but as we descended the stairs to the tarmac, a blast of heat, like nothing we have experienced before, completely enveloped us!  This was definitely much  hotter than anywhere we’d been so far. After procuring a van large enough to hold all 7 of us plus our luggage, we set out on a two hour plus drive to Ormoc, the city where the first week of training was to begin.

As I write this, we are leaving the port city of Ormoc on a SuperCat ferry for a 2 1/2 hour ride to Cebu. I am glued to the large windows as I get a much better view of the beautiful, forested mountains which surround Ormoc. Sadly, due to forest fires in Indonesia and the smoke blown this way, the beauty of these mountains has been shrouded so we’ve been unable to see them in all their glory.

On our drive from Tacloban we made a few stops to see special places of interest such as the ship which was tossed ashore during typhoon Yolanda in 2013 when a storm surge with 25 ft waves crashed in and over this city on the sea, wiping out everything in its path.  It was a somber moment as we thought of the thousands of lives which were lost. We also stopped at the MacArthur Memorial where General MacArthur and troops came ashore at Leyte Gulf during WWII. (See John’s blog #8 for more on that).  After walking around that area, we finally started on our way through the mountainous terrain to Ormoc. We travelled through many small towns which were still very busy and congested places, but we were also treated to some incredibly beautiful panoramic vistas of mountains, rolling hills, valleys, lush with vegetation and all of them displaying various hues of green. It was a beautiful drive and we finally arrived at our hotel, Sabin Resort, where we dropped our bags, checked out the resort then headed to Bible Baptist Church where the training was taking place. 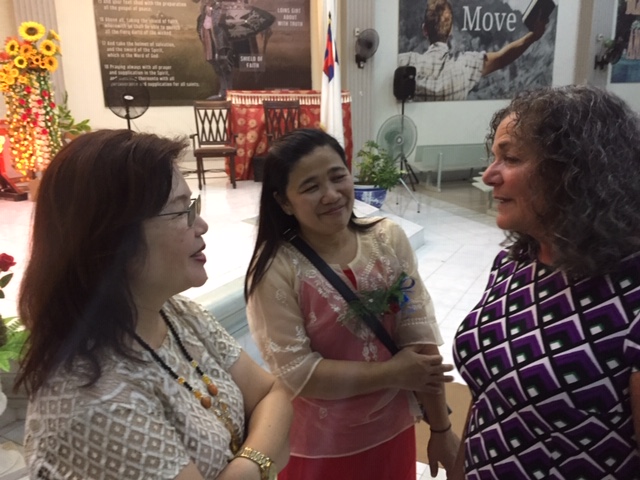 Upon arrival, we were introduced to Pastor and Mrs. Bereso and the participants in the training then enjoyed a delicious meal of Filipino food with them. At long last I was meeting face to face the many people whom John has mentioned to me. The Bereso’s home is directly behind the church and they hosted us all for every meal with sumptuous fare with of course rice at every meal. Filipino hospitality is renowned, and we were the happy recipients!  Knowing that John and others on the team love mangoes, Mrs. Bereso made sure that there were mangoes at every meal, to our delight. No wonder John has a big adjustment after these trips returning to the ordinary fare I serve at home!!  After dinner we headed over to the church where the first session was to begin and Leah and I joined the ladies group where we were welcomed and though shy with us at first, became more relaxed as days went by. Each 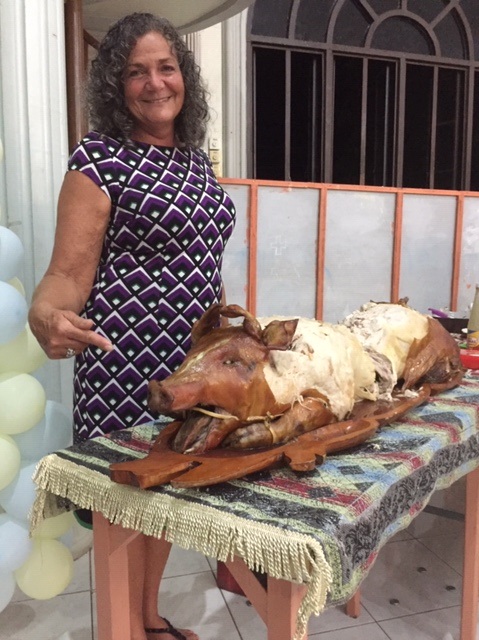 day was filled with times of teaching and discussion, sharing and praying, and culminated in the graduation last night where we enjoyed, in spite of the sweltering heat, an amazing evening of celebration and feasting, including ‘lechon’, (roasted pig), presented completely whole which is still a little unnerving for me to see. It was a night filled with picture taking and all expressing a hope that they will see us again as we said good bye. We returned to our hotel ready for a dip in the pool to end our evening.

Our time in Ormoc went by quickly and I am so thankful to meet and see firsthand all that John has shared with me after his trips here. They are a wonderful group of people, eager to learn, welcoming, so appreciative and so friendly. It has been a week of many blessings and now we’re on our first leg of the journey to Banga, Mindanao for the second week of training starting on Monday.

As we sail on the seas we are treated to the view of numerous mountainous islands, a small part of the 7,100 islands which comprises the Philippines. We can see beautiful white sandy beaches on many of them but alas we are unable to explore them. Thankfully the swells are minimal making this a very pleasant crossing, especially for those in our party who suffer from sea sickness. As we overnight in Cebu, we will have more time to explore this city which is a major port on Cebu Island and I look forward to this.