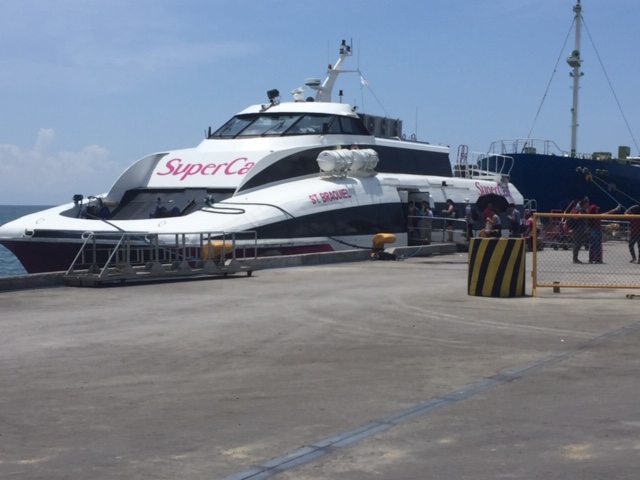 Ang Babae sa Maayo (The Woman at the Maayo)

With pleasant memories filling our minds after the completion of training and the graduation of dear Filipino brothers and sisters in Ormoc, we boarded the “Super Cat” catamaran for a quick two and a half hour voyage to the bustling city of Cebu in the Visayas, the central region of the Philippines. The sun glistened softly off the calm sea as flying fish darted speedily away from the catamaran’s double hull. We watched with amazement as they skimmed the surface of the water sometimes traveling more than 50 ft through the air in one bounce before crashing clumsily back into the water. Over and over again we watched this repeated pattern as we saw one flying fish after another try to outperform each other. As we passed numerous single seat fishing boats and watched the fisherman straining as they pulled their nets upward to the surface I was reminded again of that historic call of Jesus to Andrew and Peter, “Follow me and I will make you fishers of men.”

As the boat slowed and moved into the narrow channel between Cebu and Mactan Island where the famous explorer Magallen was killed by the equally famous tribal chieftain Lapu-Lapu, we marveled at the sheer magnitude of the Cebu port’s towering infrastructure and the plethora of all kinds of sea and ocean going vessels crowding the waterway eager to take on export goods or deposit import goods from numerous ports throughout Asia and the world. The “Super Cat”snaked its way carefully through the channel as it passed close to freighters and yachts, ferries and coast guard vessels and then skillfully swivelled around in the water and gently nestled itself alongside the massive wharf designated for its use. After retrieving our luggage our “group of seven” walked the football field length of the wharf and found comfort under some shade while Mario left us and moved into a sea of vehicles to hunt for a taxi van large enough to 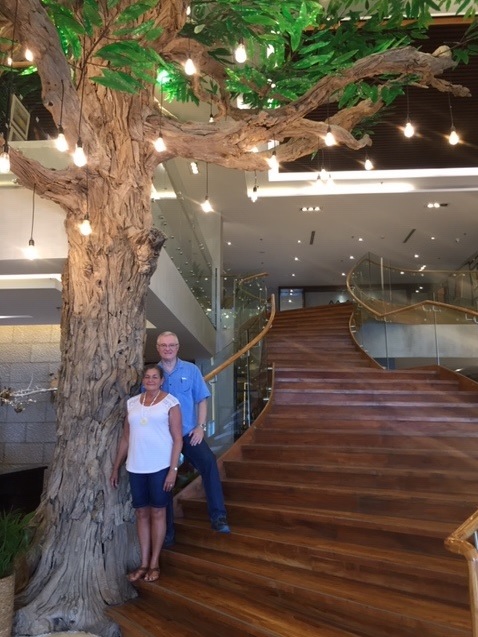 carry our battered suitcases and sweaty bodies. When we and our luggage were all on board our taxi exited the port out onto the busy streets of Cebu to take us to our awaited oasis, the Maayo Hotel.

Of all the temporary accommodations we have enjoyed in these mission trips to the Philippines in the last 5 years, the Maayo makes them all seem like camping experiences. Its furnishings and wall fixtures celebrate Philippine workmanship and artistry; it’s restaurant and cafe display mouthwatering Philippine dishes and fruits; and the warm hospitable greetings of colourfully dressed hotel personnel - handsome Filipinos and beautiful Filipinas, is the icing on top of the cake. It’s 16 stories of plush five star accommodation is crowned with a stunning top floor cafe and swimming pool that offers a stunning panoramic view of the beauty of Cebu.

Dave Roberts volunteered to pay for the delicious mango shakes we all enjoyed before dinner. This took him to the bar in the centre of the restaurant. It was here that Dave was the first to meet Jenny, “the woman at the Maayo.” As he began to pay for the mango shakes, this waitress informed him, “Sir, if you pay with your Visa card you get a 20% discount.” When Dave thanked her for the tip she then asked him about the reason for his trip to the Philippines. This gave him an opportunity to explain who we were and about the training of Filipino pastors and church leaders. It was then that she asked another question and it suddenly became clear that this was not a random conversation, a mere exchange of pleasantries. “Sir,” she asked respectfully, “does your church have any good teaching on your website? I need help.” Paul then joined the conversation, and they gave her the website information and learned more of her story.

Six months ago her partner traveled to Japan joining the large and growing oversees Philippine work force. The separation was difficult for her but they both believed this emotional sacrifice would ultimately benefit them financially, giving their beautiful baby girl better opportunities in the future. But it was not long before she heard that her partner was now with another woman in Japan and would not be returning to her and their daughter. Crushed by this news and betrayal, Jenny sank into deep depression. In the darkness, bitterness took root and she welcomed the uncontrollable thoughts of how she could enact revenge on her ex-partner. Struggling with the kind of woman the depression and bitterness was moulding her into she began to cry out in desperation to God and to listen attentively to any direction and help she might receive from the many television and radio preachers that fill the Philippine airwaves. In growing desperation she cried out again to God and said, “Please God! Send someone to me TODAY who can help me.” And now she stood at the restaurant bar with Dave and Paul listening to her story.

When dinner was over Paul introduced us all to Jenny. He said to her, “This is our pastor and if you get on our website he is the one you will be able to listen to.” All of us were able to speak with her but because she was working there was not the opportunity to speak at length and present to her the Gospel which we knew she needed carefully explained to her. I gave her a copy of my book “The End of the World” but as we walked away from the restaurant we all knew that we needed to find a way to speak with her again at length. I quickly returned to the restaurant and asked her when her shift was over and would she like and be able to talk with me then. It was now 8:30 pm and she said, “Really? Would you do that? Thank you. Yes, I finish work at 11:00.”

Mario and I returned to the restaurant a few minutes before 11:00 and Jenny welcomed us to sit with her at a table. After listening again to her story and perceiving the hunger of her heart we began to share starting with, “For the wages of sin is death, but the gift of God is eternal life through Christ Jesus our Lord.” Within the hour, with tears in her eyes, she called on the name of the Lord and asked him to come in and change her heart. Mario then gently counselled her about what she needed to do to grow in her new faith. Our time ended with her reading Jesus’ words of assurance, “I tell you the truth, the one who believes has everlasting life.”

Both Mario and I lost a few hours of needed sleep that night but we were well compensated with the joy that comes when one is rescued out of darkness and transferred into the kingdom of light. Shortly after 1:00 am, as I put my head on the pillow, I thanked the Lord again, as I have done many times in the past,  that he is the great preparer of hearts and the orchestrator of events who brings desperate and broken sinners across the paths of those entrusted with the Words of Life. To God be the glory!

(Postscript - On Friday Dave will overnight again at the Maayo before he returns to Zambia. On the following Friday the Gerics will do the same. This, Lord willing, will give opportunity to connect with Jenny two more times. Mario and Raquel Villanueva are working to find her a good church to attend in Cebu.)