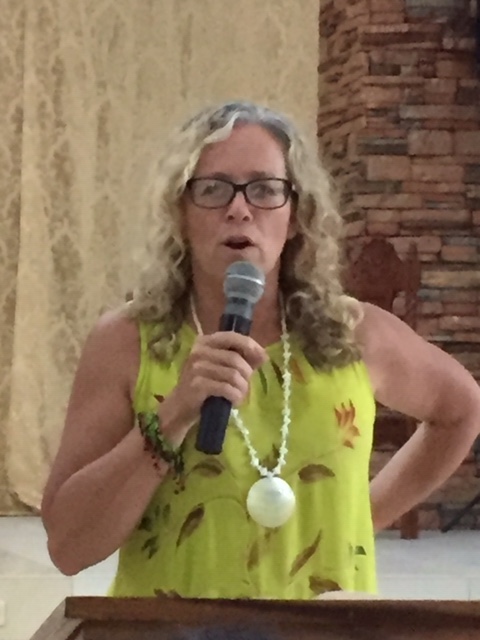 Met, Pastor Jong’s wife, asked Leah and Andrea to share their testimonies at the Wednesday prayer meeting of the Banga Evangelical Church (BEC). At first we thought this meant another night out after a long day of training and all we wanted to do was head back to the Aqua Vista Resort have a refreshingly cold shower and flop onto our beds in air conditioned comfort. However, BEC has its prayer meeting at 4:30 p.m. which enables students and other members to attend before they go home after a long day of study and work.

We entered the building to an almost empty auditorium, but within minutes the people started to arrive. The meeting was led by Marivic, a 54 year old woman who, we later learned, was widowed just 4 years ago. Her husband, who led her to Christ when they were in their late teens, was a faithful BEC member who succumbed to cancer after a lengthy illness.  With humble demeanour she asked the people to stand for the opening hymn. As we sang, following her lead, I sensed woundedness.

After introducing Leah and Andrea, she called on them and then was seated in the front row. Leah went first and shared about her childhood and early teenage years growing up in Belfast during the years when Northern Ireland was torn apart by sectarian violence and strife between Catholics and Protestants. This was the first time someone from Ireland had ever spoken in their church. It was good for me to hear again the story of the Geric’s conversion to Christ at West Highland - this time from Leah’s vantage point.

If Leah was the first Irish born person they heard, Andrea was certainly the first Jamaican! To the story of her conversion, Andrea added the three dark years when she was surrounded by the dark clouds of depression and felt that God had completely abandoned her. In the Philippines, depression still carries with it an unbearable stigma that was true in Canada even 30 years ago. I wondered how this part of her testimony would be received.

When Andrea finished, Marivic courteously thanked Leah and Andrea for sharing and then to our surprise she informed us all that hearing Andrea’s story had given her the freedom to share her own which she had kept hidden for years. Sensitive to the time remaining needed for prayer she, for the very first time, shared with her church family the darkness and pain of her own depression.

After a season of prayer for the church, the Philippines, their government and for missions, Marivic asked Pastor Jong to close the meeting with a benediction.  No sooner had amen been said than Andrea made a beeline directly to Marivic. After a long hug they sat together on the front pew for the next half hour and prayed with each other. This was a prayer counseling moment we all knew had been ordained by our Father in heaven.

In addition to Jenny who came to Christ in Cebu one week ago, this was the second time the Lord confirmed to us that he was ministering his grace sovereignly in people's lives and we were part of his great plan. To God be the glory uli (again)!