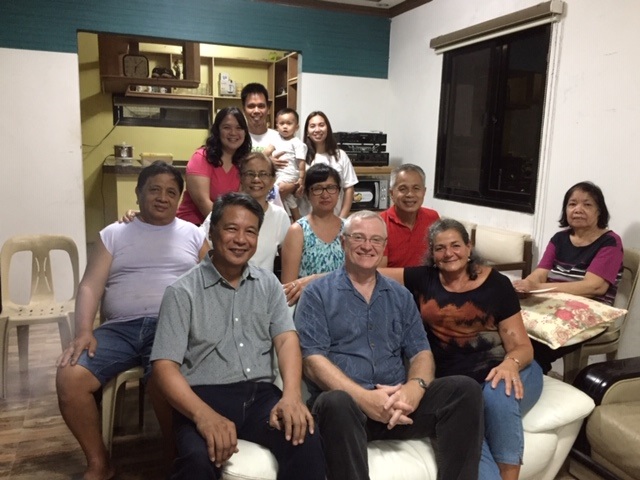 Just as I thought I was getting over jet lag, I find myself waking at 2:30 a.m. and unable to sleep again. After only 4 hours of sleep, I’m amazed that I am still able to function and have the strength to keep going though I know I will eventually begin to feel the effects.

On Friday morning we made our way from Makati to Baliwag driving through Manila and our skilled driver knew all the side roads to take to avoid heavy areas of traffic. He took us  through areas of Manila where we had never been before and though we came within inches of other vehicles, scooters, motorcycles, jeepneys, tricycles and people, I felt perfectly safe as he so capably maneuvered around and through the sea of traffic. Once we got through Manila, our drive north went very smoothly and once again I was amazed at how built up everything was where once there had been beautiful, green rice fields. I actually felt sad to see all this beautiful farmland gone. As we went further north it was good to see the rice fields that remain.

When we entered Baliwag I was totally confused and disoriented as everywhere is so built up. We were dropped off at our hotel where we settled in and had a long nap. After waking we walked around exploring where we were at ‘8 Waves Hotel’ which has a number of very large pools and even a wave pool. Later we were picked up for dinner and as we drove I was amazed at how much this area has changed. After dinner we went to the SM Mall and I was in total shock. I could not believe we were in Baliwag as we walked through this totally modern and beautiful mall. We didn’t even have a supermarket when we lived here and my senses were being bombarded as we strolled through the mall. After this adventure we were back at the hotel for a good night’s sleep we hoped.

We set out the next morning taking our first jeepney ride to Tarcan which used to be the outskirts of town, on the edge of the beginning of rice fields, but is now a bustling and congested area of the city. We had decided to walk the areas we wanted to see in spite of the heat as we were then able to really see and experience everything. Our first stop was the second home in which we lived which was in Tarcan. Though the area around it is totally different with businesses, a palengke (market), and a variety of other buildings, as we entered the lane to the compound, it was immediately familiar to 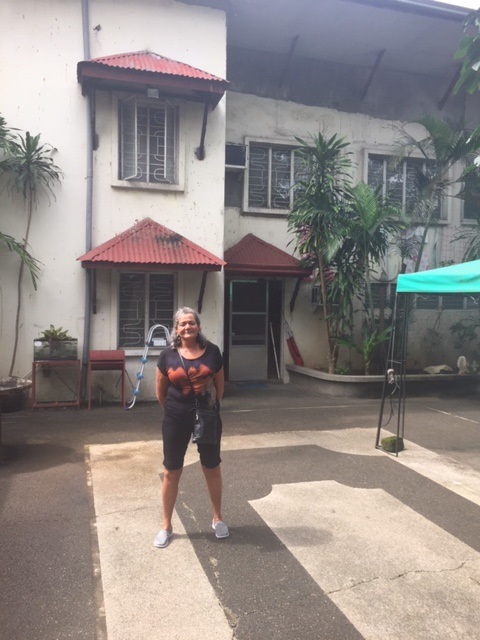 me and I felt so much joy remembering our years in this home. It is a large compound which has the large house in which we lived, a huge warehouse, and it used to have another house and a two storey gazebo where we met for worship in the beginning of Baliwag Bible Christian Fellowship. So many memories flooded my mind. This was where we brought Peter home as a newborn, where John David learned to ride a bicycle, where our children played with other Filipino children, speaking Tagalog fluently with them, where we set up a wading pool and enjoyed many hours in it, where John killed a Philippine cobra and also a rabid dog that had come into the yard, and where we saw the beginning and growth of a new church with many moving from darkness to light as the gospel was shared with them.

The resident of the home, Rozelle, was there and she graciously invited us in where we were able to walk around the main floor remembering the meals we enjoyed around our dining room table prepared by our katulong (househelper), the many times of fellowship with missionary colleagues and Filipinos, the time I tripped on the stairs while carrying a kettle of freshly boiled water for Mary Lue’s bath and having the water splash over the right side of my face causing it to be covered in blisters but thankfully healing without scars, for the times without electricity and water making us feel as though we were camping, for the time we heard machine gun fire close by as we were putting the kids to bed and we all dropped to the floor and another time when we had to grab the kids and rush outside as we were experiencing an earthquake. There were so many memories to recall as I reflected on our years in that home. I had a sense of deep contentment thinking of those years.

From Tarcan, we walked to other areas where missionary team mates had lived and it was so sad to see these homes dilapidated and in disrepair when I thought of the 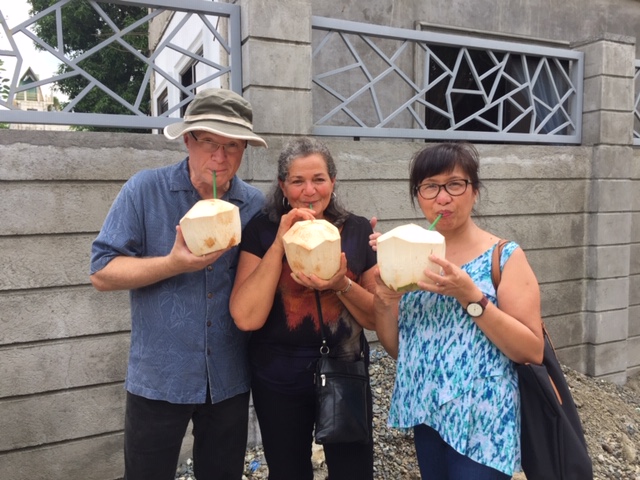 many special times we had enjoyed in them.  As we walked to our next destination feeling the heat and rivulets of perspiration down my back, I was delighted to see a ‘buko’ (coconut) cart where we were able to purchase bukos and enjoy drinking the refreshing water and eating the soft white jelly straight from the buko. This was a treat for me and reminded me of the many times I did the same in Jamaica. 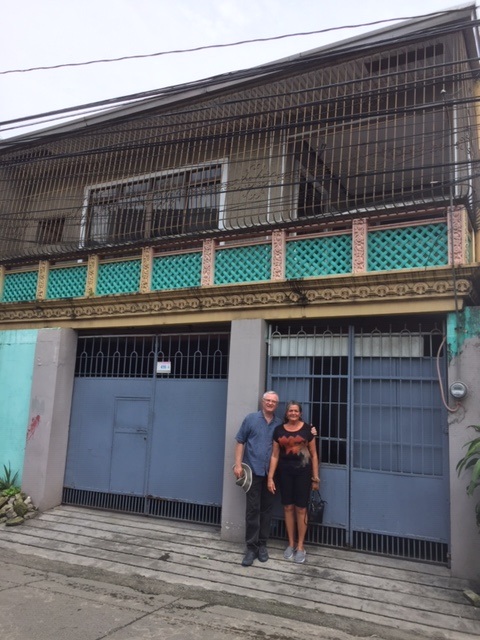 Santiago Street. How it had changed We also visited Baliwag Bible Christian Church which I was seeing for the first time as it was built 28 years ago and met the pastor, Derrick, and other leaders. After a brief visit we headed to our final destination which was our first home in Baliwag on La Rosa to the point where there was nothing familiar about it from the outside but a few unique memories came to mind. This was the home to which we brought Mary Lue as a newborn, and upon arrival from Makati we were without electricity and exhausted so we placed some mats on the tiled floor for a nap and woke to find the faces of Filipino children peering in to see this ‘white baby’ as they had never seen one before.  It was while living here that Katherine at 4 years old asked us why there was so much blood when a baby was born and upon further investigation we learned that she had been playing next door and had watched our neighbour giving birth!!  Imagine our shock when we discovered what she had witnessed. And the time when Katherine and John David came running into our home covered in blood and asking me to come and see, which was a pig being slaughtered across the street and as they stood by and watched the blood had splattered all over them!  And our disappointment when sleeping in our bedroom downstairs to find our room filling with smoke in the early morning from the outdoor cooking of our neighbour making it impossible to sleep in there.

While here, we returned to language school for six months before plunging into the challenge of church planting and the formation of our team. With our growing family we moved to Tarcan after living here for only a year. 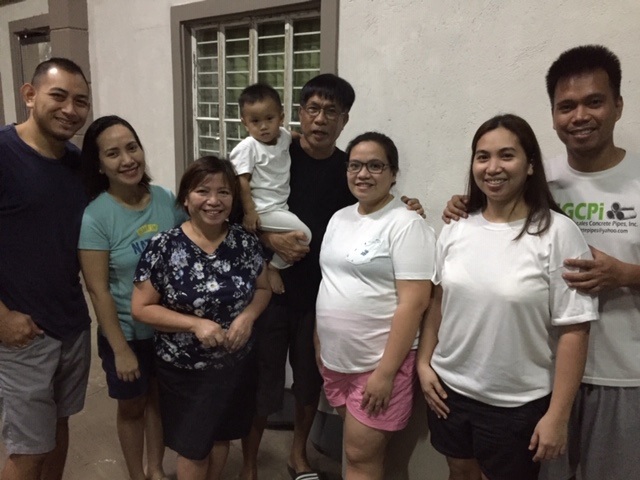 After a few hours of needed rest and respite from the heat we resumed our Memory Lane experience in a barangay (barrio) called Suliban, a place very special to John. It was here he had the experience of leading the whole Cruz family to Christ. For over a year John rode his bicycle there every week surrounded by the emerald rice fields. At first only a few attended his study in the Gospel of John. One woman hid herself in a closet and refused to come out to meet him. Two others sat in an adjacent room and occasionally looked in with skepticism written all over their faces.  But then the matriarch, Mrs. Cruz, came to Christ and at the urging of “Nanay” (mother) they all began to listen and one by one after much inner struggle the Spirit broke down their resistance and they came to Christ. Well we remember the day they destroyed their idols and John had the joy of baptizing them all. Mrs. Cruz is now with the Lord but again we renewed our fellowship with Henry and Cora, Nardo and Dori, Joe and Mellet, Imelda - and their many adult children who now follow the the Lord.

After a delicious meal of fried Tilapia at Joe and Mellet’s home we concluded our ‘Walk Down Memory Lane’ encompassing our four plus years in Baliwag. We returned to the coolness of our hotel room and after needed showers to remove a day’s perspiration in the Philippine sun, we gave thanks to God for precious memories of places and people.