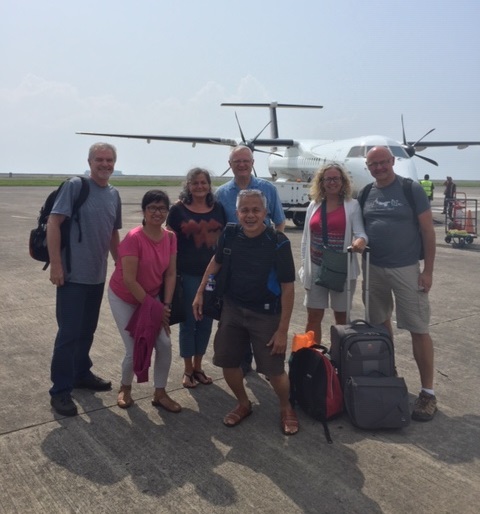 After a wonderful Sunday in Baliwag being reunited with old friends and worshipping at the church we planted in the late 1980’s we proceeded one hour north happily avoiding the traffic congestion of Manila. Our destination was Angheles City, the place of the Clark International Airport. This was once the Clark Air Base of the United States Air Force. On December 7, 1941, it was attacked by Imperial Japan. From Clark massive B-52 Bombers  once took flight carrying deadly payloads to drop on North Vietnam at the height of the Vietnam War. In 1990 just after Mount Pinatubo exploded and showered carpets of think wet ash all over the Philippines, Clark airfield was inoperable and the cost to clean it up was impossible. It was at this point the Americans decided to leave the Philippines, return Clark to the exclusive use of Filipinos and let the Philippine government carry the costs of removing the damaging ash and restoring it to a useable airport. Today it is a highly efficient, modern and growing international airport that helps relieve Manila of air traffic congestion.

After a few hours sleep we woke early to take the 4:00 am shuttle to Clark passing through the remnants of the red light district once bustling with American servicemen. The old flashing neon lights, meant to attract foolish young men, spoke only to us of a terrible scourge on the Philippine landscape. Within minutes we had our bags checked and sat down in air conditioned comfort before boarding our 6:00 am flight to Cebu. These special and memorable few days in Luzon were now behind us and our mission to the Philippines was about to begin.

As we casually strolled through the Cebu airport to catch our next flight to Tacloban we stumbled upon Paul and Leah Gerics and Dave Roberts, looking nicely tanned from the African sun! The Gerics and Dave were scheduled to be on the same flight from Hong Kong to Cebu but Dave’s flight from Johannesburg, South Africa was delayed. He did however join them at the beautiful Maayo Hotel in Cebu about 8 hours after they had settled in there to enjoy all of its comforts. After an exchange of joyful hugs we all got caught up on the happenings of the past few days and listened with interest to some of Leah’s first impressions of the Philippines (make sure to read her upcoming blog).

The flight to Tacloban was barely 50 minutes in length. As we gazed out the window in an attempt to see the beautiful mountains, sea shores and other landmarks, we were again disappointed by the thin layer of smoke caused by Indonesian forest fires that veiled the Philippines natural beauty. And then as the planes doors opened and we descended the steps to the concrete tarmac below we were engulfed in the sweltering heat. Immediately I was reminded why in the past we had always chosen to go to the Philippines in January! 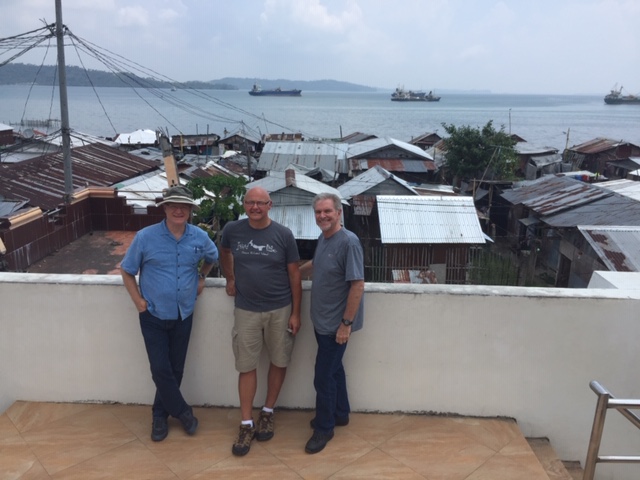 From the Tacloban airport we quickly visited the memorial to the 13,000 plus people who were killed by the tsunami in 2013. The remains of the MV Eva Jocelyn stand on the exact place where the storm surge pushed it on that infamous day in November. A 25 foot wave drove the vessel through Barangay Anibong killing most of its residents. We looked out over the rebuilt shanties and tried to imagine the horror of that day. Our hired driver from this place to our destination in Ormoc then informed us that he lost his 4 younger sisters and his mother on that day.

From this memorial we made one more stop before reaching our destination - The MacCarthur Memorial, which is really the memorial of the famous battle of Leyte Gulf where the American forces landed to liberate the Philippines and the might of the Imperial Japanese Navy was crushed. Since our last visit the memorial has undergone a number of improvements and work there was still underway to prepare it for the planned ceremonies in November of the 75th anniversary of this historic battle which turned the tide of the war in the Pacific.

For the next two hours we laughed and shared together as we renewed our fellowship. This time was enriched as we enjoyed the surrounding beautiful scenery- the emerald rice fields of Leyte and the majestic mountains we passed through on our way to Ormoc and the Filipino pastors and Christian leaders we would soon be reunited with. Finally, we arrived at the Sabin Hotel and had just enough time to unpack our suitcases, shower and change our clothes. The final training in Ormoc is about to begin.