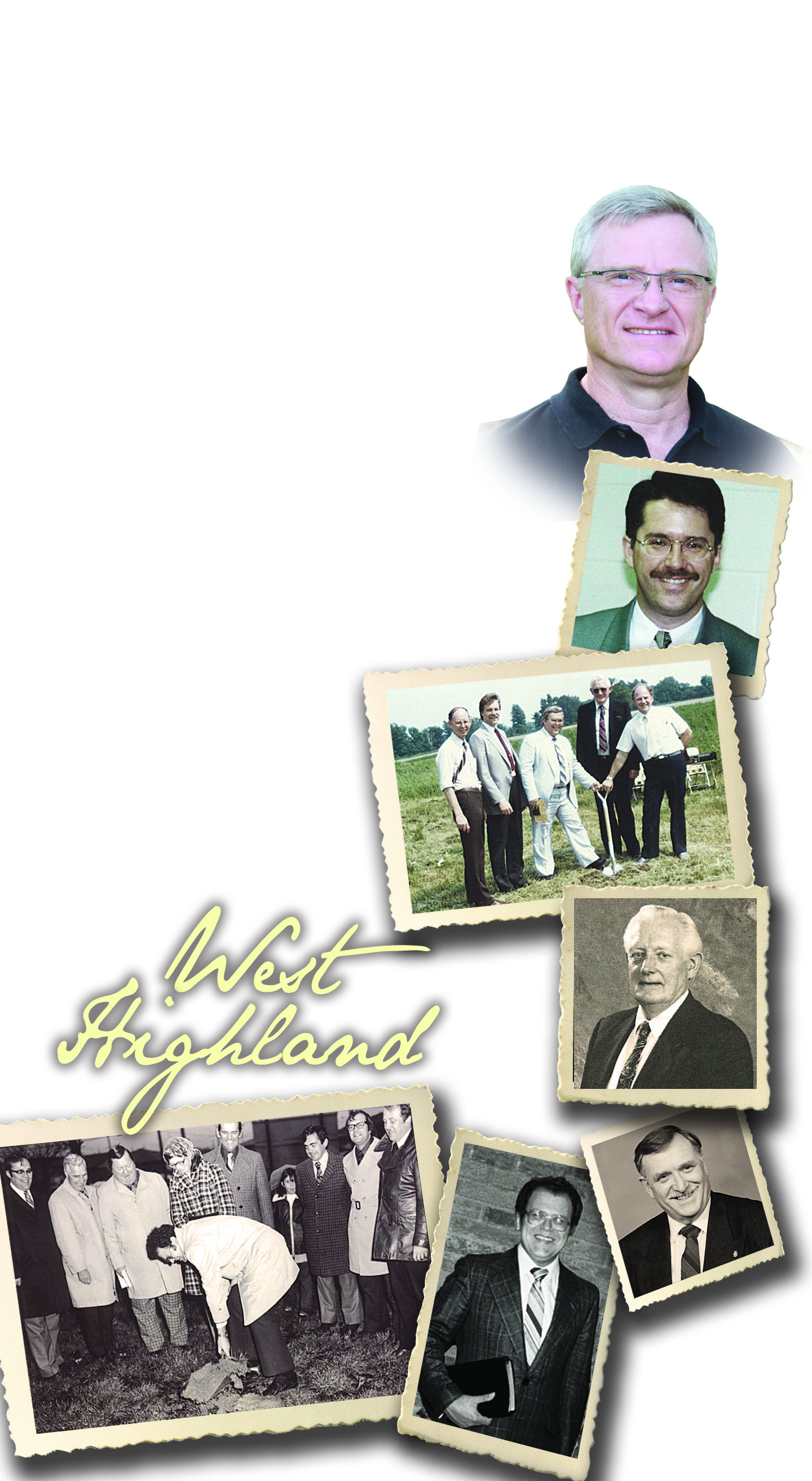 The history of West Highland Church is proof of God’s wondrous grace to a small group of believers who found him always faithful, always bountiful, and always leading.

In March 1972, six couples attending Elliott Heights Baptist Church on Hamilton's east mountain, had a vision of establishing an evangelical church to minister to the burgeoning population of the west mountain. Weekly prayer meetings were established in various homes to bathe the vision with prayer. In September of that same year, the first Sunday service was held in Westwood Elementary School. Before the end of 1972, due to the influx of interested people, evening services were held in the Terryberry Library. God blessed and more people started coming, adopting the vision as their own.

Brian Baxter was the first pastor, beginning his ministry in January 1973. God blessed and the church grew enabling the purchase of property at the corner of Garth St. and Limeridge Rd. Within a year a building program was initiated, and on May 18, 1975, the cornerstone was put in place. A multifunctional building was erected with a seating capacity of 225.

In 1977, Ian Kirby-Smith accepted the call to West Highland and the church began to bulge at the seams. He remained at WHBC for five years and then accepted a call to another pastorate. And God continued to bless.

The 1980’s were a time when the congregation had grown into a strong but still maturing church family. Lambert Baptist had arrived bringing his heart for evangelism and Bible teaching in his enthusiastic and infectious way. Soon over 300 members and adherents were attending every Sunday morning.  So, after much prayer seven acres of property was purchased further south on Garth St. Through the time of planning for a new building the Spirit of God continued working in his people: the ministry of Pastor Baptist was blessed, people were saved and baptized, and the Word was took root in people’s lives. In May 1987, the building at 1605 Garth St. was finished and became the new home for West Highland.

It was a glorious and celebratory day and the church was full of praise and thankfulness for all that the Lord had done. However the following Sunday it was still a congregation of around 350, sitting in an auditorium seating 750, and they couldn’t help but sense the new challenge that God was now laying before them.

In the third decade, the goal was to highlight the team approach to vision casting and implementation and to carry this theme to every aspect of the work. Lambert Baptist retired from the church and was followed by Deric Bartlett.

Many tasks seemed beyond what the people could handle, but they surrendered those concerns to the Lord and gave thanks as He miraculously met those needs. Each year brought new challenges which resulted in completion of the sanctuary pews, multi phased expansion of the paved parking lot, maximizing the physical footprint with the development of Christian Education rooms and a washroom for people with disabilities, and becoming officially incorporated as a church.

By the end of December 2004 the church said good-bye to Pastor Deric Bartlett who had led it for seven years through significant growth and positioned it for a new vision under new leadership.

In June of 2006, witnessing the slow but sure sale of surrounding area to developers, an additional  3. 7 acres of land was purchased to the east of the present property.

God saw that the church was ready for new leadership and in September 2007 the Pastoral Search Committee concluded its work and a call was extended to John Mahaffey to become the church’s next Lead Pastor.

Near the end of 2008, Vision 20/20 was unfolded with a new mission statement "Making the Word of God Fully Known and the People of God Fully Mature". This vision is a plan to guide our many ministries and church family toward the year 2020. Immediately, it began to impact the physical, spiritual, structural, and staff areas of the church.

On the physical side, the office space was renovated to expand the cramped Children’s Ministry area. The staff moved their offices down the street and spent the next 8 years working from rented space at St Elizabeth Village.

On the spiritual side, prayer was emphasized through Seek Week at the beginning of the year and in summer the Mountain Prayer Summit complemented on-going weekly prayer meetings. The congregation was challenged to make Jesus the number one issue in the city of Hamilton.

On the structural side, the governance of the church was changed to an Elders Board.

On the personnel side, leadership and staffing changes under a new divisional structure, with the support of a Deaconate, empowered ministry leaders to be managers of their ministries.

By the mid 2010’s the church was again feeling squeezed by overcrowding and limited by an aging and lacking facility. A large capital campaign was initiated resulting in a doubling of the church building footprint and a full renovation of all original facilities. After the 2018 grand opening, West Highland enjoyed new avenues into ministry never before available.

God has been generous to our church for more than forty-eight years and for that we are thankful. We wait expectantly for what He will continue to do in and through this church in the next phase of His vision for it, provided His people remain faithful to the gospel.