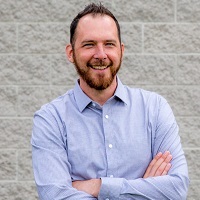 Jamie grew up in Toronto and is a big Maple Leafs fan. Through the influence of his parents and Camp Widjiitiwin, he understood the gospel of Christ when he was 7 years old and decided to follow Christ. At the age of 16, he was baptized at Rexdale Alliance Church in Toronto and, under the teaching ministry of Pastor Sunder Krishnan, he continued to grow in his understanding of the Scriptures and what it meant to be a disciple of Jesus Christ. During his time at York University, he connected with a group of young men who were being led in a serious study of the Scriptures by a Power to Change staff member. As he became more involved with Power to Change, he gained practical experience in evangelism and in 2002, between his second and third years at University, he was in Tanzania, East Africa evangelizing and discipling new believers. This missions experience was a major turning point in his life and he realized that there was nothing else in the world he would rather do than to share the gospel and make disciples of Christ. Upon completion of his Bachelor of Arts degree in History and English, he decided to forgo Teachers College and go straight into full-time ministry with Power to Change.

For the next seven years, Jamie focused on evangelism and discipleship at the University of Waterloo and Guelph campuses where he eventually became the Campus Team Leader, a position which gave him the experience of overseeing the ministries of several Power to Change workers. In the summer of 2011, he and his wife, Vanessa, along with their two sons, Noah and Jude, moved to Kampala, Uganda to minister to students at Makerere University for two years. Before returning to Canada, their third son, Blaise, was born in Kampala.

Jamie’s time with Power to Change gave him opportunity to also minister in Peru, Denmark and the United Kingdom. In 2014, he was appointed to serve as an Elder at Calvary Baptist Church, Guelph. The following year, after serving with Power to Change for 13 years, he transitioned to pastoral ministry and became the Associate Pastor of Outreach and Discipleship at Calvary.  In 2016, he and Vanessa welcomed their fourth son, Haddon, into their family. In 2018, Jamie completed his Master of Theological Studies from Heritage Seminary in Cambridge.

Jamie joined our staff as Pastor of Discipleship Ministries in 2019.

How to Live in Light of the Kingdom - Luke 12:35-48
View All by Jamie Strickland